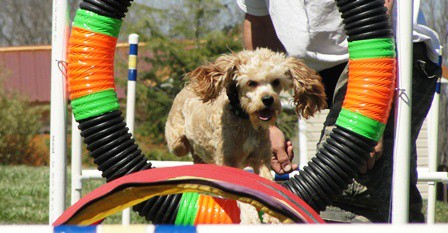 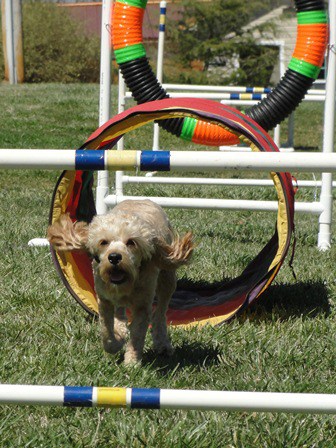 Sully is a 1-year-old Cockapoo that was surrendered by his owners because he was displaying aggression in the home.  He was snapping, growling and even biting the adults and children with whom he lived. Sully was clearly deemed a terrorist in his home. After being surrendered, he was adopted by one of our trainers who worked with him on his behavioral issues and began to use agility training to resolve them.  By giving Sully more mental stimulation along with the physical exercise involved in agility, he was soon on his way to becoming a well-balanced dog.  A big part of the problem with Sully was that he suffered from boredom and agility helps with this immensely.  Sully no longer show aggression with people and now lives with his trainer and three other dogs.  He often shows off his agility skills and performs agility demonstrations at public events and expos.

Luna is a purebred Shih tzu that found herself in the local animal shelter after being bred and her puppies were sold off by the previous owner.  She was rescued by the local humane society and brought to our School for Dog Trainers for our students to work with as part of our Second Chance Program.  Luna was aggressive with bigger dogs because she had not had enough exposure with them and was afraid.  As part of her rehabilitation, she was taught to perform agility with her student trainer as part of the Canine Training and Behavior Modification Professional Course.  This mental stimulation and physical exercise allowed her to relax around other dogs to whom she was introduced.  This productive socialization and the confidence that she gained through agility dog training caused her aggression with other dogs to go away.

Luna and Sully both were able to benefit from agility dog training as part of their rehabilitation program.  Our courses teach students a variety of methods of resolving behavior issues in dogs as part of our School for Dog Trainers.  If you are interested in learning to work with resolving dog problems or are interested in learning to become a dog trainer, feel free to call 866.200.2207 or email training@highlandcanine.com