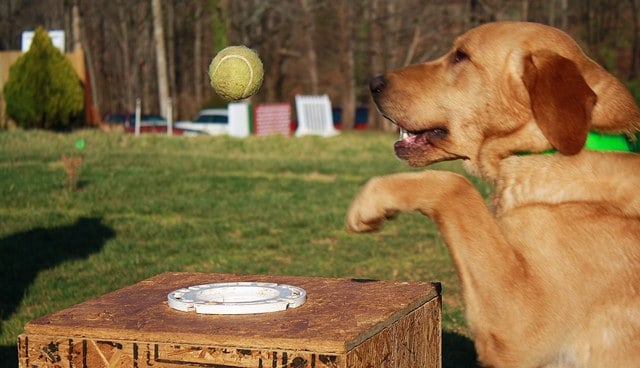 The most commonly used method for training detection dogs is Simple Direct Association.  The dog must be pretested to ensure that it is motivated by a toy or ball and that it will gladly hunt for the ball once it is out of sight.  With this method of training, the odor is simply paired with the reward in a way that the dog begins to believe that the odor equals the reward.  This method is fairly easy and straightforward and simply requires us to make a strong association or bond between the odor and the reward.  Because the dog is to believe that the odor produces the reward, it is important for the handler to keep the reward hidden until the precise moment where the dog is to be rewarded.  This can often cause issues and can be particularly problematic if the dog learns that the handler has the reward.  If this happens, the dog will often begin to focus more on the handler than the odor and can begin to give false positives or ignore the imprinted odor in an attempt to get the reward from the handler.

DFR or Deferred Final Response is another common detection dog training method where the dog learns to associate the reward with the odor but not as directly as with simple direct association.  With this detection dog training method, the target odor is generally imprinted through search exercises and the dog is rewarded with a ball or toy.  Again, with this method, the handler must constantly keep the reward hidden from the dog to ensure that the dog searches for the odor to produce the reward.  With Deferred Final Response, the final indication is often taught independently of the search.  Pairing these two back together in the appropriate context can often be difficult for the detection dog trainer. 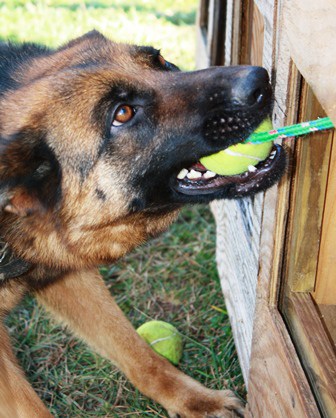 Another method of training detection dogs is the On Target method of detection dog training that was developed and perfected by Randy Hare of Jackson, MS.  In order to use this method of training, we must test each dog to ensure that is has certain abilities prior to beginning training.  One of the most important criteria for the dog, in addition to their prey drive, hunting ability and speed for the ball, is their desire to transfer between rewards.  With this method, the reward or toy, in itself, is not the reinforcement for finding odor.  The competition for the reward is the reinforcement for finding odor.  Unlike other detection dog training methods, with this system the dog understands that the handler or trainer has the reward and the only way that the dog will obtain it is to locate and indicate on the target odor.  With this detection dog training method, it is much easier to proof the dog off common odors and it eliminates a great deal of detection dog training problems.  With this system, we often see fewer false alerts, problems with cueing, and the dogs are more reliable overall.

Our School for Dog Trainers teaches students of our Detection Dog Trainers course a variety of methods for training detection dogs including the ones listed above.  If you are interested in becoming a trainer for detection dogs or have questions about our courses, feel free to contact us at 866.200.2207 or email training@highlandcanine.com